We LOVE Corps of Engineer Campgrounds! We were so happy with our site at Mark Twain Lake that we decided we’d try to hit more Corps lakes on our way south. In the interest of flood control for the Mississippi, they dammed a lot of the watershed rivers so there are PLENTY of Corps Lakes in Missouri. We just had to decide how far we wanted to drive.

John wanted to visit the Wilson Creek Battlefield and Pea Ridge Battlefield (both NPS sites) so we decided the Table Rock Lake area was a perfect “close enough” site for day trips. It is also outside of Branson and everyone said we HAD to stop in Branson. These parks use the Recreation.gov reservation system. They recently changed to new software and it is not working well at all. When we tried to find a site, we could see there was ONE campsite available at Mill Creek through the next weekend but there was no information or pictures: Lakeside? Length of site? Level? Shaded? We took a chance and booked it.

It was WOW all over again. It is only water/electric and we were staying for 9 nights but they have a shower house so we figured we’d be fine. Our site is on the lake (almost all of them are), paved, level, gorgeous views, nice breeze – awesome! My one complaint was the lack of trees on our site. I can’t handle full sun so I spent time hiding in the shade of the rig or moving the chair to track the sun to hide in the shade but it was still an awesome site. Most sites have ample shade, just not ours. Our picnic table was also a level down as were many in the park. If anyone has accessibility issues, it would be good to check first (IF the reservation system gets fixed enough so you can see the site so you know if it will work for you). Our site was just big enough for the RV and car but some are big enough for a huge rig, boat and two cars with room to spare.

The campground has the previously mentioned shower house plus a picnic area with pavilion, playground, volley ball net, swim beach and nice wide boat ramp. Part of the park is Day Use so you have more than just campers in the area. Many campers were towing boats. Once the boats were in the water, several campers just drove them around and anchored them or tied them off at the lake shore along their campsite. There were some huge rigs in camp as well as smaller rigs with companion tents. It’s a great place to hang out and it was packed over the weekend. They are closing the rec area down on October 31st so we camped there the last 9 nights of the season. We only had a few days of touring planned but we are working on catching up on the blog so we are trying to force ourselves to stay in one place instead of wandering off to tour everything and anything that interests us. It’s hard but we’re getting there.

We took one day and drove the half hour over to the Dewey Short Dam and Visitor Center (it’s a BIG lake and we’re in the Ozark Mountains so everything is a twisty, turny, longer-than-you-thought-it would-take-you drive). The visitor center is beautiful. They have good interpretive exhibits, balconies overlooking the lake and dam, helpful volunteer hosts, tables to sit at and eat your bagged lunch and a few hiking trails. The hosts were very knowledgeable and had lists and maps of the lake area, Branson, free things to do, places to hike, cool things to see, and more. The vestibule is loaded with tourist brochures so you can get info even if the visitor center is closed but it is well worth seeing if you can hit when it is open. 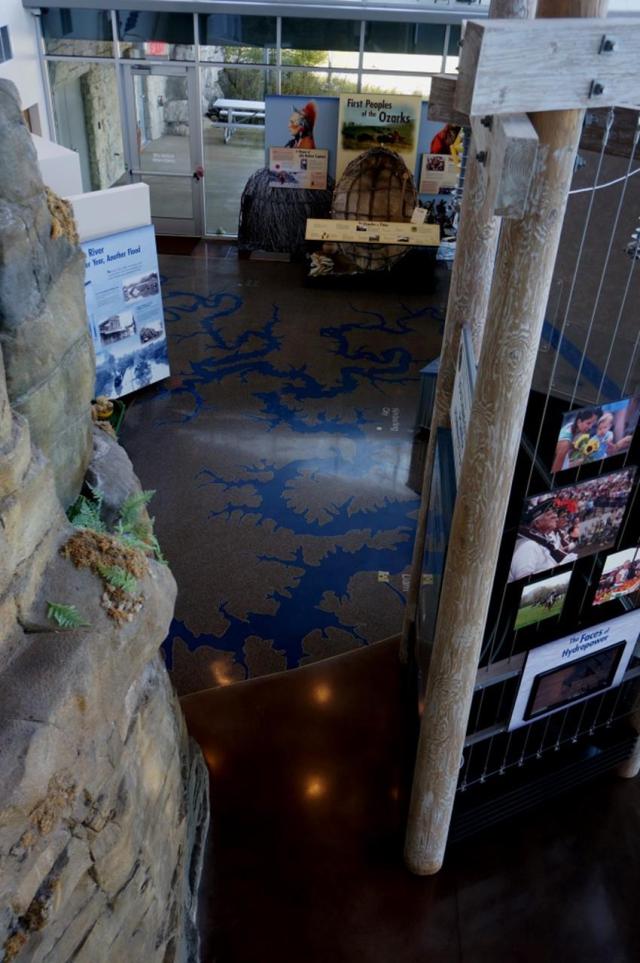 We were told we HAD to hit Branson, so we did. Branson is ALL about tourism. We won’t be blogging separately about Branson. It is a tourist town. It is honky-tonk, signs, billboards, junk shops, treasure shops, performances (good and not so good) and so much more that we are really not into. We drove through slowly but nothing even made us think about stopping. We walked through historic downtown and there were some interesting shops there, as well as junk shops. We enjoyed browsing the historic Dick’s Five and Ten store and checking out all the little things you didn’t think you needed (we only needed two little things but there were so many more cool things we wished we needed). We walked down on the riverfront and checked out the dancing fountain (the helpful volunteers at the visitor center told us we had to catch the 8 pm lighted musical dancing water show they have every night. We didn’t make it. Eight is kind of late for us to sit in the cold to watch the water then drive those twisty turny roads back home.) We walked their “Promenade” which seems to have all the same stores as in any big enclosed mall, except it is not enclosed. Branson is awesome for some people, and depending on who you talk to, some of the shows are really good… and some are really terrible. It’s all a matter of taste and style. I’m sure it’s a great place, just not for us.

Out of all the places they had to eat in Branson, we wound up at Steak and Shakes… which was very different than the ones we’ve seen before. This was a sit down, diner style place with waitresses, $4.00 dinners and happy hour milkshakes served in the old fashioned glass with a straw and spoon (you need the spoon, these are very good, thick milkshakes). John and I had a very filling lunch for around $10 for both of us. It was good and we were good with that.

This entry was posted in Campgrounds, Parks and tagged Missouri. Bookmark the permalink.