Shepherd of the Hills Fish Hatchery

As on many of our travels, we often come across something to do that wasn’t on our agenda. The Shepherd of the Hills Fish Hatchery was one of them.

This is the largest trout-rearing fish hatchery in Missouri where more than one million rainbow and brown trout are released each year. The hatchery was built at the same time as the Table Rock Dam.

Why was it built? It was known that the dam would impact the native fish because the water flowing from the dam would be too cold for them. So the decision was made to replace the native species with trout because they thrive in cold water. (Trout are not native to the area.) However, the conditions in Lake Taneycomo would be too unstable to allow the trout to spawn. Hence, the fish hatchery was built.

The visitor center has some excellent and unusual exhibits and live critters.

We weren’t sure how this poor red-eared slider got that way but we felt sorry for him. I’ve never seen a turtle with an hourglass figure before. Hmmm, must be a she.

The three venomous snakes found in Missouri were on display – timber rattlesnake, cottonmouth, and copperhead. This copperhead was downright creepy looking. 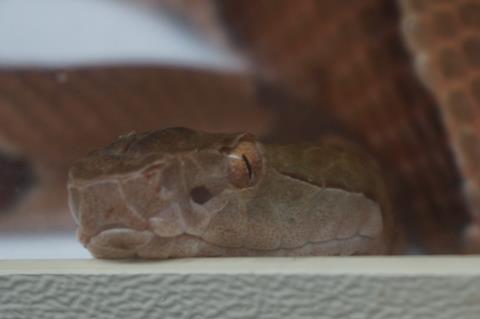 The most interesting nature exhibit was this two-headed western rat snake. I wonder how the two heads decide who gets to eat. Rock, paper, scissors?

On our way from the visitor center to the hatchery we passed a large fish tank with trout lined up to check us out. I wonder if they rate us on a scale of 1 to 10 based on the likelihood of us feeding them.

I have to say that if I were a trout I would strenuously object to the way my eggs (called roe) or sperm (called milt) were collected. If I were a female, humans would shoot compressed air into my gut and squeeze my roe out. If I were a male, they would just squeeze my belly and milt me like a cow. How humiliating!

The roe and milt are mixed together by hand and poured into incubation jars. Eyes develop in about two weeks. These are called “eyed up” eggs. The eggs hatch in about a month. At this point they are called sac fry because the yoke sac is still attached to the fish. For the next two weeks the fry feed off the yoke sac. After that they depend on hatchery workers for food.

After spending about five months in the Hatchery Building, about 90,000 three-inch trout are moved to a raceway pool. In the photo below you can see some of the many raceway pools. (I didn’t count them.) You can also see the dam in the distance. 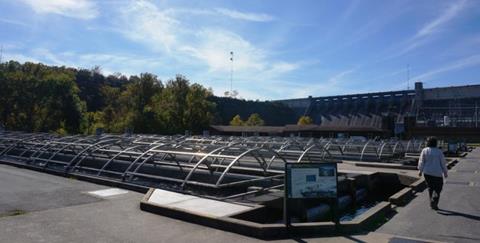 As they grow, the pool starts to get crowded. At seven inches half the trout, or 45,000, are moved to a second raceway pool. At nine inches 15,000 trout are moved from each of the two raceway pools to a third raceway pool. The trout remain in these three pools until they are ready to be released.

But working at a fish hatchery isn’t all fun and games. Every two weeks you get to scoop poop from every raceway pool, and there are a lot of pools. And you’re in the water while you’re doing it! Yuck!

Where does all this fish poop go? Why into old raceway pools to dry! Where else? Once the poop dries it is hauled away and used as fertilizer. Good riddance.

Finally, the day arrives when the trout are big enough to be released. They’re dragged up in a large net, dumped into a water tank on a truck and literally spit out into Lake Taneycomo. How rude!

To make matters worse, there are fishermen waiting to catch you!

This entry was posted in Nature Notes, Parks, Science and tagged Missouri. Bookmark the permalink.